Total US debt is the sum of all outstanding federal government debt. The United States Department of the Treasury tracks total public debt outstanding, a figure that changes daily. The debt clock in New York also registers it. On October 1, 2020, the debt exceeded 27 trillion dollars. Why has it increased so much? There are several factors that have contributed to the growth of this figure; in this article we will explain 5 reasons why the United States has such a large debt.

Of the total, about two thirds corresponds to public debt. The government owes this to buyers of US Treasury notes, including foreign individuals, companies and governments.

The remaining third corresponds to intergovernmental debt. The Treasury owes this money to departments that hold securities in government accounts. The largest owner is Social Security. 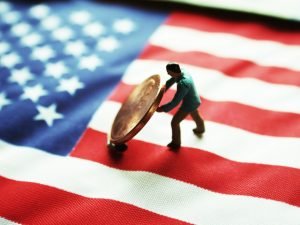 These government account securities have been in surplus for years and are used by the federal government to pay other departments. They are expected to be met when baby boomers retire in the next two decades. Since Social Security and trust funds are the largest creditors, we can say that the main owner of the US debt is basically the retirement of all citizens.

The national debt is greater than what the United States produces in an entire year. This high ratio of debt to gross domestic product (GDP) tells investors that the country could have trouble paying back loans. That is something new and worrying for the US In 1988, debt was only half of America’s economic output.

The national debt is greater than what the United States produces in an entire year. This high ratio of debt to gross domestic product (GDP) tells investors that the country could have trouble paying back loans. That is something new and worrying for the US In 1988, debt was only half of America’s economic output.

5 reasons why the United States has such a large debt

The national debt is an accumulation of federal budget deficits. Every new spending program and tax cut adds to the debt. These show up in the president’s budget deficits.

The biggest deficit goes to President Obama. Added $8.3 trillion to debt, an increase of 70%. That’s because of the American Recovery and Reinvestment Act (ARRA) stimulus package, which halted the 2008 financial crisis. It also included both tax cuts and increased military spending.

Although the national debt under Obama grew the most in dollars, it was not the largest percentage increase. That honor goes to Franklin D. Roosevelt, who added an estimated $236.1 billion between 1933 and 1945, an increase of 1,048%.. He did this to fight the Great Depression and prepare the US to enter World War II in the early 1940s.

President Trump is the second largest contributor to the debt. As of September 30, 2020, added $6.7 trillion from Obama’s last budget. However, this was an increase of only 33%.

Note: More than $2 trillion of the debt that President Trump added to the total was from stimulus spending to help families and businesses recover from the COVID-19 pandemic. Trump’s fiscal year budgets also added to the debt before the pandemic emerged.

All presidents borrow from the Social Security Trust Fund. The Fund received more revenue than it needed through payroll taxes from baby boomers.

Originally, this money should have been invested to be available when boomers retire. Instead, the Fund was “lent” to the government to finance increased spending. This interest-free loan helped keep Treasury bond interest rates low, allowing for more debt financing. But, it must be paid back by rising taxes as more boomers retire..

Foreign countries like China and Japan buy Treasury bonds to invest their export earnings which are denominated in US dollars. They are interested in lending to the United States, their largest client, so that it continues to buy their products.

Congress sets a debt ceiling, but raises it frequently. Since 1960, Congress has changed the US debt limit 78 times, and will likely continue to do so. President Donald Trump signed the Bipartisan Budget Act of 2019 that suspended the public debt limit until July 31, 2021.

In the short term, the economy and voters benefit from deficit spending because it boosts economic growth and stability. The federal government pays for defense equipment, health care, and building construction, and contracts with private companies that then hire new employees. These new hires then spend their government-subsidized wages on gas, groceries, new clothes, and more, and that fuels the economy. The same effect occurs with employees the federal government hires directly. As part of the GDP components, federal government spending contributes about 7%.

In the long term, debtors could demand higher interest payments. This is because the debt to GDP ratio increases and they would want compensation for a higher risk of not being paid.

Note: Declining demand for US Treasuries could push up interest rates and that would slow down the economy.

Lower demand for Treasuries is also putting downward pressure on the dollar. The value of the dollar is tied to the value of Treasury securities. As the dollar declines, foreign holders are paid in a currency that is worth less. That further decreases demand. Many of these foreign holders would become more likely to invest in their own countries. At that point, the United States would have to take on higher interest payments.

Congress knows that a debt crisis could be close. In less than 20 years, the Social Security Trust Fund will not have enough to cover the retirement benefits promised to baby boomers.

That would imply higher taxes once the US’s high debt rules out the possibility of getting more loans from other countries.