All currencies in circulation have their history and the dollar is no exception. In fact, its design usually shows certain curious facts that are part of American history or that have to do -in one way or another- with the government, morality and conception of the American nation, among others. Next, we will analyze the symbols and denominations of the US dollar.

From the phrase “In God We Trust” to the large eagle on the front of the $1 bill, everything has its reason for being. Are you curious about this topic? So join us to discover what do the symbols and denominations of the american dollar mean. 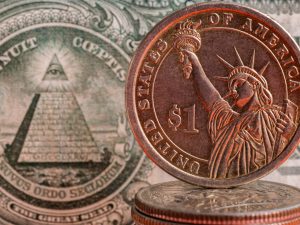 The history of the US dollar

The US dollar was first listed as a world currency thanks to the Bretton Agreement of 1944. From there, it became one of the currencies -if not the most- powerful in the world. And it is that, if you think about it, the US dollar is backed by the third largest economy in the world: the United States.

Where does the name “US dollar” come from?

The term “US dollar” is a denomination that differentiates this currency from others with the same name, like the Canadian dollar, for example. Initially, the US dollar was marketed as a currency worth its weight in gold or silver. Later, the Treasury launched paper notes redeemable for precious metals, such as the dollar with silver certificate.

However, this has changed over time. In the 1970s, the United States abandoned the gold standard for a floating standard.. Although the value of the US dollar is -currently- fluctuating, it is in strong demand, perhaps one of the highest in the world.

What supports the value of the US dollar?

The real value of the dollar is backed by credit. What does this mean? In particular, that the price of the US dollar is based on the faith that consumers – American or not – have in the power of the US economy.

Do you know all the currencies of the United States? If you don’t, you came to the right place! Let’s see how many denominations of American currency there are and how much it costs to produce some of them:

Curious fact: Half-cent, two-cent, three-cent, half-cent, and twenty-cent coins are no longer produced in the United States; but they existed throughout history.

In circulation, you will find seven denominations of the american dollar in its paper money format:

However, they have not been the only ones. Since the creation of paper money, the United States has printed other denominations, most of them larger than today’s. Today, they are no longer printed. In fact, most of them went out of print in 1945 and were withdrawn from circulation in 1969. You don’t know what bills we’re talking about? Let’s see them:

Curious fact: In the history of United States paper money, there was also a $100,000 bill, but it remained in the hands of the Federal Reserve, that is, it never came into circulation. It is estimated that one of these bills would cost a million dollars on the collector’s market. But – unfortunately – there is no American citizen who has it in his possession. The one that can be obtained in the collectors’ market is the $1,000 bill.

Who controls the circulation of the US dollar?

The closest thing in the United States to a central bank is the Federal Reserve, which is responsible for making sure there are enough coins and bills in circulation. The Fed puts in the hands of the Office of Engraving and Printing of the Department of the Treasury of the country the task of printing these bills. In the case of coins, the issuance is in the hands of the Currency Department.

Once the bills and coins have been issued, they are sent to the Federal Reserve that is who will decide when to launch it to the market, so to speak. What is the procedure in this case? Well, the members of the Fed will know when to exchange coins and bills for public debt and when not.

But, How many dollars are in circulation? In the following graph, we will see how many banknotes circulated in 2018. 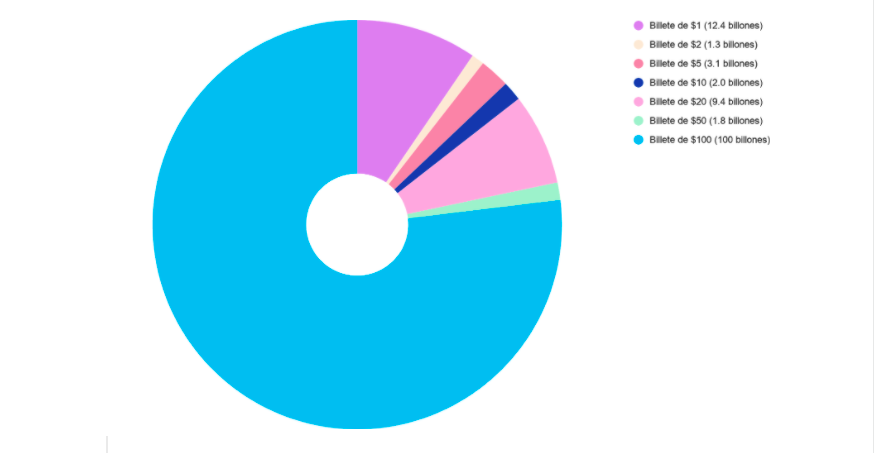 Curious fact: Very few of the US dollar bills in circulation have portraits of people who have not been presidents of the United States. Examples? Alexander Hamilton (first Secretary of the Treasury), Salmon P. Chase (Secretary of the Treasury during the Civil War), and Benjamin Franklin, one of the Founding Fathers of the country.

It is believed that the dollar symbol itself ($) comes from the Mexican peso which used to be represented by a “p” raised to the “s”. Little by little, people stopped writing this symbol and decided to simplify it, until reaching an “S” written on a line, which represented the “P”.

As for other important elements of the US dollar, there are certain puzzles. For example, the arrows held by the great American eagle on the $1 bill were originally in its right claw. What do the arrows mean? War and, being on the right side, dominance.

It is also said that the Founding Fathers used the symbology on banknotes to convey historical or moral messages, and it would not be strange, since it is thought that many of them had a strong relationship with Freemasonry.

This is what we can see on a US dollar bill:

Why is the dollar a world reserve currency?

Part of the strength of the US dollar is due to its role as the world’s reserve currency.. Most countries in the world accept dollar bills as a form of payment. Almost all oil contracts are valued or closed in dollars and 86% of the transactions that are completed daily in currency trading have the dollar as the protagonist.

As we discussed earlier, the status of the US dollar as a world currency comes after the Bretton Woods Agreement, which is nothing more than the decision of the victorious countries in the Second World War to peg your currency to the dollar, on the one hand, and to gold, on the other.

President Nixon was the one who ended the gold standard in 1973., which gave the dollar its current fluctuating value. This disconnection of currency and gold consequently linked the value of the currency to the country’s economy which depends, in short, on three specific factors:

The exchange rate and its importance for the dollar

The US dollar is usually a strong and accepted currency anywhere in the world. When someone travels abroad, it would be enough to go to a bank or exchange house to exchange your dollars for the legal currency of the destination country. If you want to know how much money they will give you for your dollars, you just have to check the exchange rate on the stock market.

Traders in the foreign exchange market are the ones who determine the value of the dollar with respect to other currencies in the market.. Typically, these investors look at factors like the Fed’s announcements, how fast the US economy is growing, how big its debt-to-income ratio is, and the interest rate currently being paid.

If they consider that the US economy is gaining strength, they bet on the rise of the US dollar. They begin to buy more and more dollars making the counter currency lose value against the American currency. If they think the economy is weak, they do the opposite or take refuge in deflationary goods like gold.

Keep reading: 5 reasons why the United States has such a large debt

The role of the Treasury in the value of the dollar

The value of the dollar is also measured through United States Treasury notes., which also takes into account the amount of dollars held in the reserves of foreign governments. The countries that export the most to the United States often have excess dollars, which increases their value in the market.

When the opposite happens, the value of the dollar weakens. Remember that these foreign countries also they usually buy treasury bonds, which contributes to the strengthening of the currency.