With new technology, there are fewer and fewer reasons to enter a traditional bank. However, although simple transactions can be made online or using a mobile application, the number of branches in the United States has only seen a slight decrease according to the analysis of the Federal Deposit Insurance Corp (FDIC). This data includes branches and main offices. In this article we will show you what they are. the most popular banks in the USA according to each state.

The most popular banks in the USA according to each state

Below, you can see the banks that have the most branches in each state and in the nation’s capital. 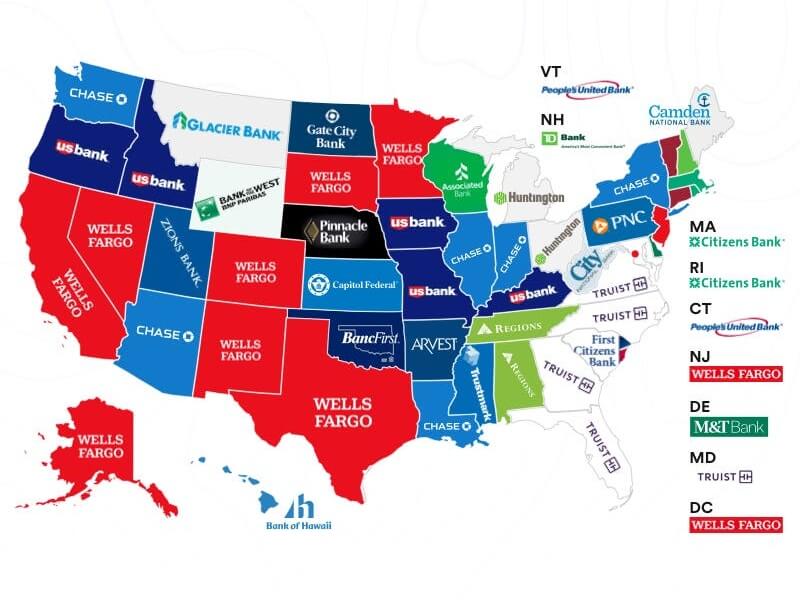 Currently, the 15 largest banks hold around 37% of all towns.

Wells Fargo, based in San Francisco, has about 5,400 full-service branches, according to FDIC data.

JPMorgan Chase is not far behind, with some 5,000 full-service branches across the country. This New York-based bank has the second-most branches in the US, including the most in six states.

Overall, the number of Wells Fargo branches decreased 2.86 percent as of June 30, 2020 compared to the prior year. Meanwhile, the total number of bank branches/offices in the US decreased by about 1.6 percent over the same time period.

The most popular banks in the USA: important changes from 2019

The merger of BB&T and SunTrust peers to become Truist was not completed until December 2019. Therefore, Truist was not included in last year’s study.

BB&T had the most branches in North Carolina and Virginia in 2019, retaining both titles as Truist this year.

These are the banks that changed rank in certain states since last year:

Some experts predict that bank branches are headed for extinction. In fact, In recent years there has been a steady net loss from locations operated by financial institutions. Since there are fewer transactions in banks, there are also fewer tellers.

New players have emerged in the space like Ally Bank, without any physical location for customers to transact. Other institutional players have created online subsidiaries such as Citizens Access, HSBC Direct, Investors eAccess, Marcus by Goldman Sachs and Banco Popular’s Popular Direct.

Online banking customers deposit checks by taking a photo, get their cash at ATMs, and open new accounts from their phone or computer. And without having to pay to operate in physical places, Online banks can often offer higher interest rates and lower fees on deposit accounts than their traditional competitors.

“Online banking is certainly feasible most of the time for many consumers,” say some specialists. “But the occasional need for a safe deposit box, a signature guarantee, a cashier’s check, or just making a big cash deposit is much easier if you have access to a local branch.”

You can have accounts in both traditional financial institutions and those that only operate online and easily transfer funds between them, to get the best of both worlds.

“Different consumers value different features. Aspects such as a large network of branches, national or regional presence, a wide range of products and convenience, will have different levels of importance depending on your individual needs and circumstances”, indicate specialists in the field.

Wells Fargo still leads in terms of the largest number of offices, although it has about 159 fewer as of June 30, 2020, compared to the previous year. While Chase’s office total only dropped by about 45 in the same one-year period.

“Branches continue to play an important role in how we serve our customers, But as customer preferences change, so will our branches and the experiences customers have in them.”says a Wells Fargo spokesman.

“We hope that the pandemic will accelerate branch consolidations,” some specialists indicate.

Larson says there are a couple of factors that go into that:

The Analysis of bank user behavior indicates that people are moving from using technology very little to using it a lot.

Wells Fargo is about to fall behind JPMorgan Chase Bank as the number one operator of bank branches. Although both financial institutions have consolidated their locations in recent years, Wells Fargo is shrinking at a faster rate than its closest competitor.

JPMorgan’s consumer and community banking serves about 63 million American households, according to its 2019 annual report. Wells Fargo boasts of serving one in three households in the United States.