make the decision of refinance your mortgage could be difficult. At the end of the day, there are many things you should consider, especially the equity of the property, the interest rate offered by the new lender, what additional fees or charges apply, and the next payment term. However, there was a federal program designed by the Federal Housing Finance Agency (FHFA or Federal Housing Finance Agency) that sought to throw a lifeline to homeowners who were up to their necks in water: the HARP program.

What is the HARP program and how did it work? What were the requirements to qualify for a mortgage loan with HARP? Let’s take a look at it carefully! 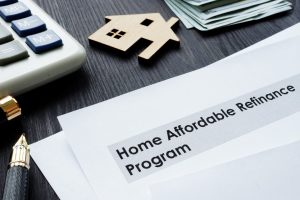 What is the HARP program (Home Affordable Refinance Program)?

If, despite being current on your mortgage payment, you begin to have difficulty paying, and refinancing does not seem like a good option, the Home Affordable Refinance Program (known as HARP) could have been an excellent alternative for your family. . This federal program focused on refinancing affordable housing and was managed primarily by the US Federal Housing Finance Agency (FHFA).

The first thing you should know? This program was specifically designed so that borrowers could benefit from a refinancing at a much lower interest rate than what was available in the market.

Note: The HARP program was launched in 2009, just after the financial crisis caused by the housing bubble in the United States. In principle, the FHFA and the Treasury Department calculated that the beneficiaries of this program could reach four million people.

How did the HARP affordable housing program work?

The first thing you need to know is that the HARP program was targeted at a certain group of owners. We are talking about a citizen with a mortgage loan guaranteed by Freddie Mac or Fannie Mae, or any of the properties that these entities have taken before May 31, 2009.

Due to the impact of the 2008 financial crisis -and its effect on the value of real estate in the country- many homeowners began to sink into debt and defaulted on their mortgages or at least were in serious danger of doing so. The FHFA set its sights on a specific group of lenders: those that were “upside-down” or underwater; both equivalent financial terms.

What happens when a borrower is underwater?

People say that a borrower is underwater or has an underwater mortgage when your loan debt is greater than the current value of the collateral. In the case of a mortgage, the lenders collateral is the properties. In this case, if the owner stopped paying, the bank would lose everything because the value of the house would be much less than the installment that the borrower still has to pay. If you sell it, you will not get anything back and this could lead to insolvency or financially destabilize you.

What is the goal of the HARP program?

The federal government launched the HARP program in 2009 to try reduce the rate of foreclosures and thus help sub-prime borrowers, that is, those who were about to default on your mortgage and, therefore, of losing the property. In itself, there are several factors that you should know about this program:

Remember: The HARP affordable housing program was only available to those borrowers who qualified. In order to do so, they had to be current on their mortgage payments and the property had to be in good condition. Borrowers who had defaulted or were evicted from their properties were unfortunately not eligible for the program.

How do I know if I am eligible for a refinance with the HARP program?

FHFA mortgage refinances were similar to any offered at banks and credit unions. What does that mean? That it was subject to certain eligibility conditions.

First, you had to make sure that your mortgage was backed or issued by Fannie Mae and Freddie Mac. If you want to know if this was your case, be sure to visit Fannie Mae Mortgage Loan Lookup Y Freddie Mac Loan Look-Up Tool. Second, the mortgage must have been sold to Freddie Mac or Fannie Mae before May 31, 2009, not after.

Third, you should be up to date with payments. What does this mean? That you could not be behind in your payments for more than 30 days in the last six months and that your annual history could not present more than one late payment, regardless of the time of delay.

Another factor to take into account is that not all properties entered the HARP program: only primary residences, second homes and properties that were for rent. In addition, the LTV ratio, that is, the value of the loan and the value of the mortgage, had to be no less than 80%.

Note: Remember that the HARP program has been extended until December 31, 2018 and is no longer available.

Differences between HARP and the so-called “Modifications”

Mortgage Modification (Modification) was another program that was put in place to stem the flow of foreclosures in the United States after the market crash. Unlike the HARP, these programs were for borrowers who were already in default on the loan or for those who were at imminent risk of default.

Of course, these were not the only distinctions. modifications could only be done through the current lender and each of them would establish the requirements to qualify for the program. In addition, although the process to modify the mortgage changes the terms of the contract – through a mortgage note – it is not the same as refinancing.

Recommendation: If you’re thinking about modifying your mortgage, consult with a licensed tax professional. Thus, you will be able to know if you would be obliged to take care of some additional fiscal responsibilities.